Sam Hughes was forced to abandon his dream of a career in the film industry when he opted to drop out of a performing arts university course to support his new family.

But the film industry’s loss has been the meat industry’s gain, as Sam has made a flying start to a career as a butcher. Less than two years after starting an apprenticeship with Brian Crane Butchers in Maesycwmmer, near Caerphilly, the dedicated 22-year- old won the Young Welsh Butcher of the Year contest last November.

His winning streak continued when he was named Foundation Apprentice of the Year at the inaugural Cambrian Training Company Apprenticeship, Employment and Skills Awards 2017. 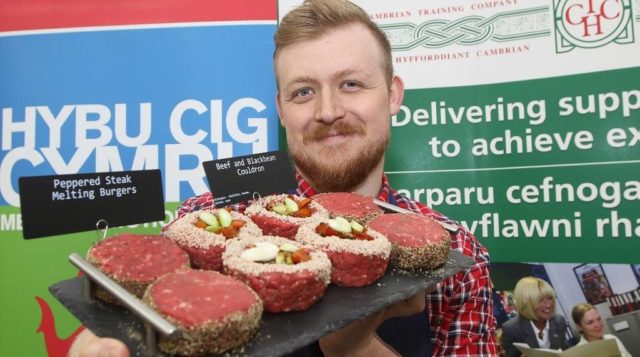 Sam, from Llanbradach, has shown total dedication to butchery since becoming the first apprentice employed by Chris Hayman at Brian Crane Butchers. His rapid progress has included achieving a Foundation Apprenticeship, moving on to an Apprenticeship and hoping to continue to a Higher Apprenticeship.

Such has been Sam’s success that Chris is now taking on a school leaver as a second apprentice. In addition, Sam has visited his former high school to promote apprenticeships to pupils.

“When I dropped out of university, I never thought I would be winning awards,” said Sam. “My confidence has been boosted during my time as an apprentice, as it has removed the huge amount of stress I was under.

“I was afraid I would always be stuck in part-time employment or zero hours contracts with no security because I didn’t go to university, but completing my apprenticeship has given me great confidence in my future.

“I have thrown myself into my role and I absolutely love my job. I try and go above and beyond in every opportunity, whether it’s ensuring that my customers always get an exceptional service or ensuring my skills as a butcher are always progressing.

“I plan to enter more competitions in the future to gain as much experience as I can. Hopefully, by doing my best in the coming years, I will achieve a personal milestone for myself and manage my own shop.

“I am talking to Chris about the future and he has plans for me to progress from being his employee to his partner in future projects. I have great confidence in my future which I may not have had if it wasn’t for my apprenticeship.

“My advice to anyone who is considering an apprenticeship is to do your research and definitely go for it. I have 10 friends who went to university and only two of them are actually using their degrees in jobs, plus they have a £9,000 student loan to pay off.”

Chris praised Sam’s dedication and said he was now an invaluable member of the team. “From day one, Sam has worked extremely hard despite the long hours and sometimes challenging conditions that come from working in the industry,” he added. 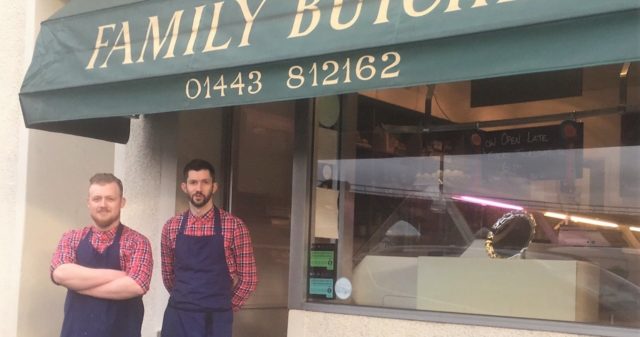 “He has strived at every opportunity to match our high expectations at the shop whether that be service, display or butchery innovation. Sam constantly displays his passion for the trade through keeping up to date with industry innovation via YouTube, the Internet and industry magazines to bring a host of new ideas and working practice to the shop.”

He confessed to feeling nervous about taking on his first apprentice because they would be working so closely together in the shop, but said it was a cost-effective way to employ and train somebody from scratch the way he wanted. “I have been very lucky with Sam and it has worked out well for us,” said.

He praised the good relationship developed with Cambrian Training since his initial call to Chris Jones, head of the business unit for butchery.

“Some training companies can grow too big and they lose the personal touch,” he added. “Cambrian Training Company have a core of key companies they work with, but they still provide a personal service.

“Frank Selby, the training officer, is in regular contact and the company provides support above and beyond what they are contracted to do.”