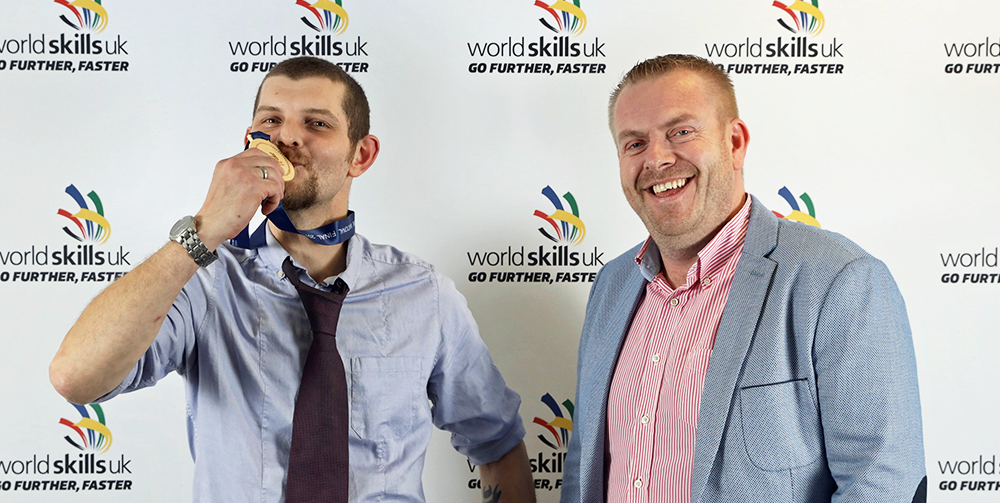 Absolutely thrilled and flabbergasted” was the reaction of Stafford butcher Stefan Rice after winning the Butchery WorldSkills UK Competition final at the weekend.

Stefan, 35, from Cannock, who works for A. Hindle and Son, Stafford, edged out five rival butchers from England, Wales ad Northern Ireland to take the coveted title at WorldSkills UK LIVE, held at the NEC Birmingham.

The finalists completed five tasks over two days in front of a live audience, which tested their skills to the limit. The second day began with a challenging mystery box task and ended with the toughest task to date.

The butchers were each given a top and rump of beef and they had one hour to bone and trim it, one hour to seam the meat and one hour to make and display products.

“I didn’t think it was going to be my name called out, but it was absolutely fantastic and overwhelming when I was announced as the winner,” said Stefan. “I’m absolutely thrilled and flabbergasted to have won.

“I have had a great response from my customers who have congratulated me and given me cards. I’m still pinching myself.

“It was a very tough competition because there was a lot of talent in the final and a lot of good products. The finalists were a lovely group of people and I will happily stay in touch with them to share ideas and recipes.”

Runner-up with a silver medal was Liam Lewis, 31, from Winsford, who works for The Hollies Farm Shop, Little Budworth, near Tarporley and is a member of the Craft Butchery Team Wales.

Both Jason and Elizabeth are butchery apprentices trained by Reaseheath College, Nantwich.

The butchery competition is organised by award-winning Welshpool-based training provider Cambrian Training and supported by an Industry Steering Group. Sponsors are The Institute of Meat, The National Craft Butchers, The Worshipful Company of Butchers and Hybu Cig Cymru/Meat Promotion Wales.

Chris Jones, head of Cambrian Training’s food and drink business unit, said it was a very close and skilful final with little to choose between the butchers.

“Stefan was a bit more in control throughout the competition than the other finalists,” he added. “It was a strong, close competition where precision and consistency counted.

“It was great to see two talented, young, female butchers competing at such a high level and I hope they will be back next year because they showed a lot of promise. Hopefully, their participation will raise awareness of the opportunities available within the industry and encourage other young women to follow in their footsteps and compete at the highest level in the UK.”

On behalf of Cambrian Training, he thanked the sponsors for their support as the competition would not be possible without them.

The competition focused on all the essential skills required for a successful career as a multi-skilled butcher within the food manufacturing industry. Butchers were tested for overall skill, innovation, creativity, presentation, work ethic, method and approach to tasks, carcass and primal utilisation, waste and safe and hygienic working practice.

The judges were Keith Fisher from the Institute of Meat, Roger Kelsey from The National Craft Butchers and Viv Harvey, an independent consultant.

To enter next year’s competition, butchers must possess good knife and primary and secondary butchery skills, including seam butchery, with a minimum of six months practical experience, good tying and stringing skills, sausage making experience and the ability to work under pressure in front of an audience.

Butchers wishing to compete to become the UK’s best butcher 2020 may register at https://www.worldskillsuk.org/champions/national-skills-competitions/express-your-interest-in-worldskills-uk-competitions-2020

Butchery was one of more than 60 skills featured in WorldSkills UK LIVE. The competitions are designed by industry experts and focus on the highest UK and international standards