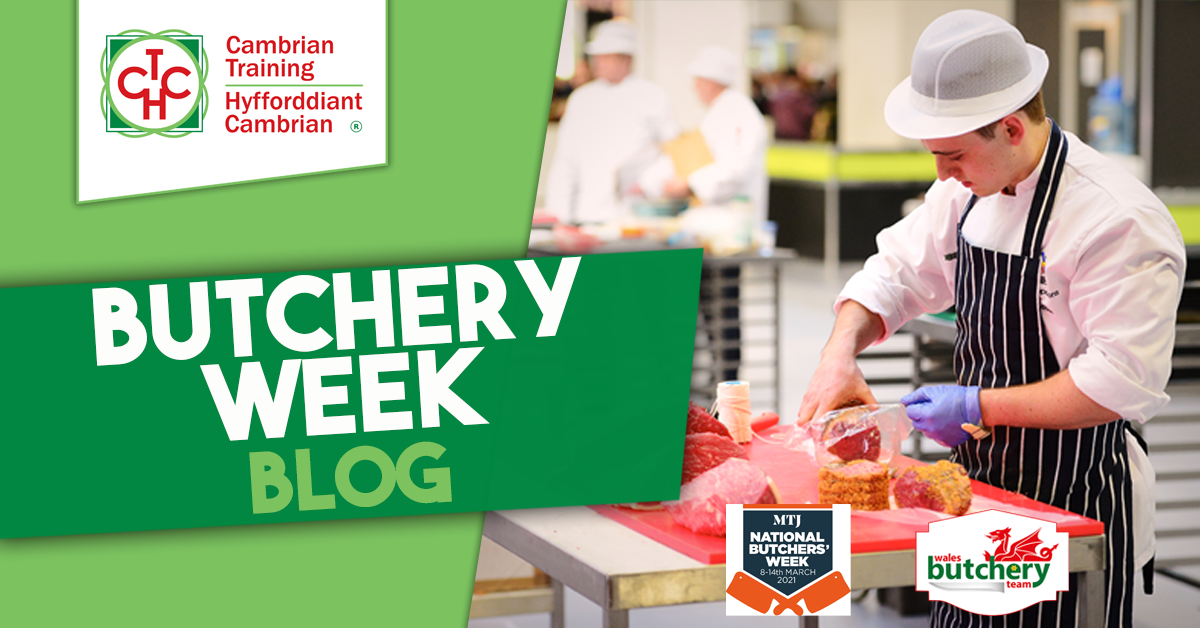 To celebrate we’ve been speaking to members of the Craft Butchery Team Wales set to compete in the World Butchers Challenge to find out all about their apprenticeship journeys through to competing on a world stage.

The World Butchery Challenge (worldbutcherschallenge.com) sees 16 teams from all over the globe join to compete against each other in a 3hour challenge to create award winning themed displays. The competition is also helping to secure the future of the industry by hosting The World Champion Butcher Apprentice & Young Butcher Competition. The competition is scored on technique, skill & product innovation. Sadly the 2020 competition which was due to be hosted in Sacramento, California was cancelled due to the pandemic.

Although the Welsh team haven’t been able to compete in the competition they are very eager to continue learning new skills and ensure they are competition ready for when the challenge next opens its doors.

Manager of the Welsh team, Steve Vaughan, a retired butcher, spoke about how proud and privileged he is at being asked to manage the team of a great young butchers who have all completed apprenticeships in in the industry. Steve got involved in the competition through Cambrian Training, having had 3 apprentices within his shop, one of which is Matthew, who won many awards including World Skills & Welsh Young Butcher was also selected to join the team. After completing his apprenticeship and winning various competitions Matthew is now an assessor within the industry helping others to gain their qualifications, Matthew recognises that his success has come from gaining his qualification through an apprenticeship and would recommend this path to anyone considering entering the industry. Dan another member of the team who hopes to open his own butchers shop soon choose an apprenticeship over going to college because of the hands on experience he could gain. He never imagined that taking on an apprenticeship would open doors to travel the world showcasing his skills. The forth member of the team that we were able to speak to was Ben, the teams apprenticeship Butcher who currently manages a butchers shop in North Wales whilst also completing his level 3 apprenticeship in Food Management. Ben who planned originally went to college to complete a design and photography course found that college wasn’t for him and quickly took up an apprenticeship in his local butchers shop, from there Ben has continued to gain qualifications and confidence and is excited to start competing as soon as possible.

The whole Welsh team are eager to compete on a world stage and are looking forward to showcasing Welsh butchery. Chris Jones who helped set up this team said he was really proud of the team so far and recognised how important apprenticeship qualifications are to the butchery industry.

The team would like to thank their sponsors who have helped get them to this stage, these include Cambrian Training, AIMS, Hybu Cig Cymru, Atlantic Service & Innovative Food Ingredients. – Find out more about sponsoring the team by emailing Chris Jones – chrisjones@cambriantraining.com

If you would like to find out more about becoming an apprentice, take a look at our current apprenticeship vacancies HERE
Are you a business who could benefit from upskilling your current staff or would you like to take on a new apprentice – get in touch with the team – info@cambriantraining.com