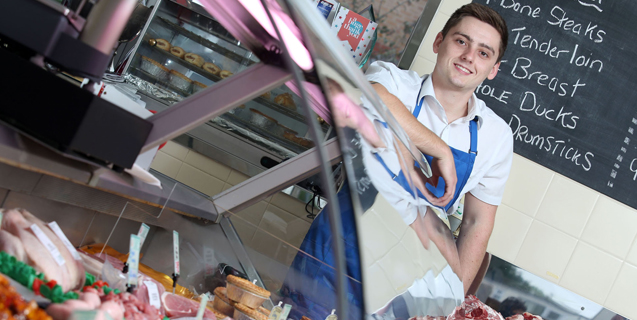 Two champion young butchers from North East Wales have proved they are cut above the rest by being shortlisted for prestigious national apprenticeship awards.

They will join 34 other finalists in 13 categories at the high profile awards ceremony at the Celtic Manor Resort, Newport on Friday, October 31. The awards are organised jointly by the Welsh Government and the National Training Federation for Wales (NTfW).

Showcasing excellence in skills development in Wales by learners, employers and learning providers, the awards are sponsored by Pearson PLC with support from media partner, Media Wales.

The awards recognise employers who commit to developing their workforce through apprenticeships and other work-based learning programmes, which support employees during their training. They are also a great way to evaluate training and development, as well as a fantastic motivational factor for any workforce or learner.

The Apprenticeship Programme in Wales is funded by the Welsh Government with support from the European Social Fund.

Tom has added entrepreneurial flair to his list of accolades as he seeks to expand his thriving business in Llangollen. Having been given the task of running Jones’ Butchers in the town three years ago, he set about gaining business knowledge and qualifications to give the shop a solid foundation.

The business has blossomed. Daily takings have doubled and profits on product lines have increased by more than 30 per cent, resulting in the need for larger premises. Tom aims to double the business profit by expanding into outside catering, boosting online sales and attracting new customers. 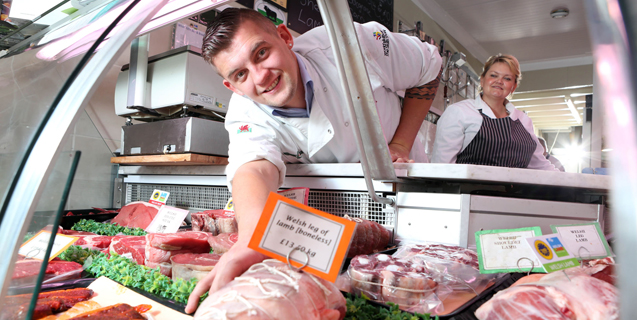 Picture caption above: Tom Jones aims to be the best in industry.

Away from work, he has achieved major success. He was named VQ Learner of the Year in 2013, is an ambassador for the ‘Future Skills…food for thought’ campaign, won the Welsh Young Butcher contest once and was runner up twice and represented Wales in the Premier Young Butcher competition.

“It’s thanks to my apprenticeship training that I‘ve been able to grow the business, resulting in my expansion plans,” he said.

Matthew’s quest to be the best has seen him become the champion Welsh Young Butcher and he represented Great Britain in a European skills competition in Switzerland last month.

He secured his place in the GB team as runner up in The National Federation of Meat and Food Traders’ 2013 Premier Young Butcher contest. He is now working towards an Apprenticeship in Meat and Poultry Industry Skills, having previously achieved a Foundation Apprenticeship.

Since joining Steve Vaughan he has won the Young Sausage Maker competition at last year’s Bpex Regional Roadshow and will compete in the champion of champions contest at this year’s event in October.

“I chose an apprenticeship to further my understanding of butchery and to learn everything I can to help me achieve my goal: to own a butcher’s shop and pass on my knowledge to other young, enthusiastic butchers,” he said.

Both butchers are engaged with learning programme delivered by award-winning provider Cambrian Training Company based in Welshpool.

Deputy Minister for Skills and Technology, Julie James said: “Apprenticeships are a great way to start a successful career. You earn whilst you learn and gain nationally recognised qualifications. They also provide industry with a skilled, motivated and qualified workforce. I wish Tom and Matthew every success in their careers.”

More than 300 key stakeholders from the vocational education and training sector across Wales are expected to attend the high profile awards ceremony, where guests will dine out with chefs from the National Culinary Team.