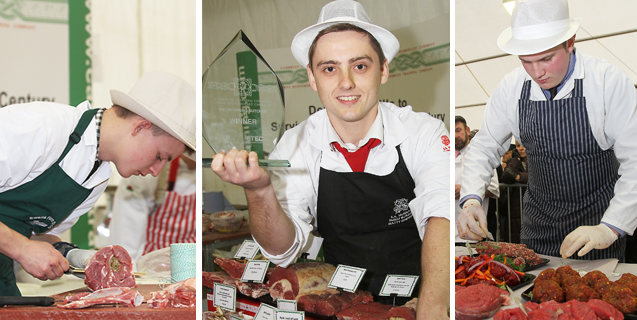 The Welsh Young Butcher competition gets under way next week and it is hotting up to be the toughest competition yet.

Defending champion Matthew Edwards, 22, who works for S A Vaughan Family Butchers, Penyffordd, near Chester, is looking to close a memorable year by retaining his title. He will be up against former champion Tomos Hopkins, 21, from Gwyrhyd Mountain Meat, Rhiwfawr, near Swansea and 19-year-old Peter Rushforth from Swans Farm Shop, Treuddyn, Mold, who made his debut in the competition last year.

Organised by Cambrian Training Company (CTC), the finalists must complete a challenge to butcher a brisket of Welsh Beef, a shoulder of Welsh pork, a full saddle of Welsh Lamb with breast and a whole Cefn Llan Welsh chicken into cuts of their choice that add value.

“This is going to be the toughest competition there has been for the Welsh Young Butcher title,” said Edwards. “I am up against Peter, who is representing Great Britain, has come on leaps and bounds since last year and is a bit of a dark horse, and Tomos, who won the competition three years on the run.

“I’m determined to win, because I want to end a fantastic year on a high. I still can’t believe what I have managed to achieve this year and to win this competition two years on the run would be a another great stepping stone in my career.”

The high standard of competitors was echoed by judge Chris Jones, also head of curriculum for food manufacture at the CTC: “It’s going to be an epic battle between three very talented young butchers and they have everything to play for with the World Skills butchery competition coming up next year,” he said. “The winner will also go through to the Premier Young Butcher contest next year.

“It’s great to see young butchers of such high calibre coming through in Wales and, importantly, they have their employers and parents right behind them, which is key to their development.”