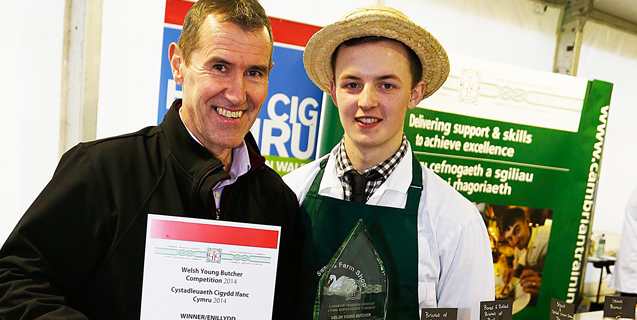 Talented 19-year-old butcher Peter Rushforth caused an upset by beating the defending champion in the final of the Welsh Young Butcher Competition 2014 at the Royal Welsh Winter Fair in Builth Wells on Tuesday.

Peter from Swans Farm Shop, Treuddyn, Mold, who made his debut in the competition last year, impressed the judges with his innovative cuts of meat to beat Matthew Edwards, 22, who works for S. A. Vaughan Family Butchers, Penyfford, near Chester, by just two points.

Former champion Tomos Hopkins, 21, from Gwyrhyd Mountain Meat, Rhiwfawr, near Swansea, who was due to compete, was forced to withdraw on the eve of the contest due to preparations for a knee operation.

Chris Jones, Cambrian Training Company’s head of curriculum for food manufacture, described the standard of the competition was exceptionally high.

“The improvement in Peter’s skills level since last year have been amazing and you could tell that he had practiced a lot, which paid off,” he added. “He knew exactly what he was doing with every product he made and he scored high for innovation.

“He came up with products that I had not seen before and his display was so clean and tidy. The competition gets better every year and there were experienced butchers in the audience who couldn’t believe what Peter and Matty produced in two hours.

“Matty actually scored higher marks than when he won the competition last year, which shows how good the standard was.”

Peter said he was thrilled to win against competition from the defending champion. “The competition brief was innovation and adding value to cuts of meat,” he explained. “It was all about inspiring younger customers to buy new products using both modern and old butchery methods.

“One of my products was a brisket crown roast. I rolled up the meat and stuffed it with leek to add value, I also did a joint rolled in peppercorn steak flavoured crumbs and a chicken cushion stuffed with duck breast and haggis.

“A lot of the ideas come from trying things out in the shop with Clive and I also take inspiration from other butchers’ shops. Clive is a very good mentor and encourages young butchers to compete.”

Next year, Peter will follow in Mathew’s footsteps by representing Great Britain in a European skills competition and will also represent Wales in The National Federation of Meat and Food Traders’ Premier Young Butcher contest at the NEC, Birmingham.

Although disappointed to lose his title, it has been a memorable year for Matthew who competed for Great Britain in a European skills competition in Switzerland in September and won the Foundation Apprentice of the Year award at the prestigious Apprenticeship Awards Cymru in October.

The two butchers were challenged to butcher a brisket of Welsh Beef, a shoulder of Welsh pork, a full saddle of Welsh Lamb with breast and a whole Cefn Llan Welsh chicken into cuts of their choice that added value and saleability.