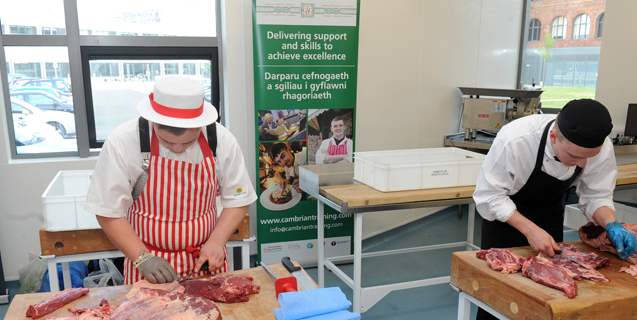 The best butchers in Wales are being encouraged to enter two competitions at the Royal Welsh Winter Fair in Builth Wells next month.

Both competitions will be held on Monday, November 30, with the Welsh Pork Butcher Competition, which is open to butchers of all ages who currently live or work in Wales, in the morning.

The Welsh Young Butcher Competition follows in the afternoon and this year the age limit has been extended to under 25 on January 1, 2015 to align with apprenticeship programmes in Wales. The competition is organised by Welshpool-based Cambrian Training Company, who are also collaborating with Keith Brown, the Royal Welsh Agricultural Society’s meat production competitions chief steward, to jointly run the Welsh Pork Butcher contest.

The young butcher contest is sponsored jointly by Hybu Cymru (Meat Promotion Wales), Randall Parker Foods, Llanidloes and WMO, Welshpool. Apart from having the kudos of being named Wales’ best young butcher, the winner will receive a cheque for £130, while the runner up will receive £70 and all four finalists will receive a trophy.

This year, the young butchers will be challenged to produce a display of meat in two hours from a whole top rump of Welsh Beef, a leg of PGI Welsh Lamb, half a shoulder of Welsh Pork and a whole Cefn Llan Welsh chicken.

The pork butcher competition is being sponsored jointly by the British Pig Association and Hybu Cig Cymru. Butchers will be given two hours to create an innovative and creative display from half a Welsh pig, using either modern or traditional methods to best promote Welsh Pork to consumers.

Butchers in both contests must choose cuts to maximise saleability and product value, with the judges looking for new, creative ideas, cutting technique, added value, display techniques, HACCP and personal hygiene and maximum yield from the carcasses.

A panel of judges will select four finalists in each competition from their applications, which must be submitted by Monday, November 9. Entry forms may be downloaded at www.cambriantraining.com .

Arwyn Watkins, Cambrian Training Company’s managing director, said: “These two competitions provide the perfect platform for the best butchers in Wales of all ages to showcase their skills at a major event. It’s a great honour to be the best in Wales at your chosen vocation.”

Mr Brown said the new competition is designed to give butchers of all ages an opportunity to have their skills recognised while at the same time promoting Welsh Pork.

“We are always trying to find ways to promote Welsh Pork and this competition coincides with new Porc.Wales initiative by Hybu Cig Cymru,” he added. “Porc.Wales aims to provide a platform for both producers and retailers to promote pork from pigs born and bred here in Wales.”