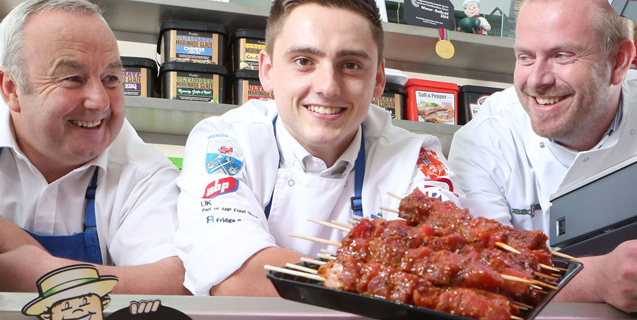 Champion butcher Matthew Edwards is on course to realise his ambition of owning and running his own shop after using apprenticeship programmes to hone his skills to the highest level.

The talented 24-year-old from Wrexham, who works for Vaughan Family Butchers, Penyffordd, has won virtually every major prize available to young butchers in Britain since becoming an apprentice.

The culmination of his accolades, which have included Welsh Young Butcher of the Year, a place in the British butchery team and numerous sausage making competition wins, was becoming the first WorldSkills UK butchery champion last year.

Now he has been shortlisted for the Higher Apprentice of the Year Award at this year’s Apprenticeship Awards Cymru, which take place at Venue Cymru, Llandudno on October 20.

Jointly organised by the Welsh Government and the National Training Federation for Wales (NTfW), the prestigious awards celebrate the outstanding achievements of individuals, employers and learning providers who have excelled in contributing to the development of the Welsh Government’s Traineeships, Jobs Growth Wales and Apprenticeship programmes. The awards are sponsored by Pearson PLC and supported by media partner, Media Wales.

The Apprenticeship Programme is funded by the Welsh Government with support from the European Social Fund.

Having progressed from a Foundation Apprenticeship to an Apprenticeship in Meat and Poultry Industry Skills, Matthew has recently completed a Higher Apprenticeship in Food Manufacturing Excellence Level Four. The programmes have been delivered by Welshpool-based Cambrian Training Company and Matthew plans to continue to a level five qualification whilst also attending a business studies evening college course.

He’s now passing on his skills to a new apprentice butcher recruited by the shop, which he runs for two days a week and when owner, Steve Vaughan is on holiday. Targets set for increased customers and turnover on both days have been exceeded.

“I have achieved more than I thought imaginable since starting my apprenticeship,” said Matthew, who promotes apprenticeships in schools and colleges. “I am very committed to what I do within the business as this is my future that I am working towards and it’s my life ambition to be successful and open my own shop.”

Mr Vaughan said: “Matthew’s enthusiasm and commitment to his work is outstanding. He has made a massive contribution to the business and smashed every target that I have set him.”

Wales’ Minister for Skills and Science Julie James congratulated Matthew and the other 32 shortlisted award finalists. “We are proud to be delivering one of the most successful apprenticeship programmes in Europe with success rates in Wales remaining well above 80 per cent,” she said.

“Developing skilled people is vital for our economy. We have some truly exceptional apprentices here in Wales and the Apprenticeship Awards Cymru provide a perfect platform for us to celebrate their hard work and achievements. Equally important are the learning providers and employers who go the extra mile to support their apprentices.”