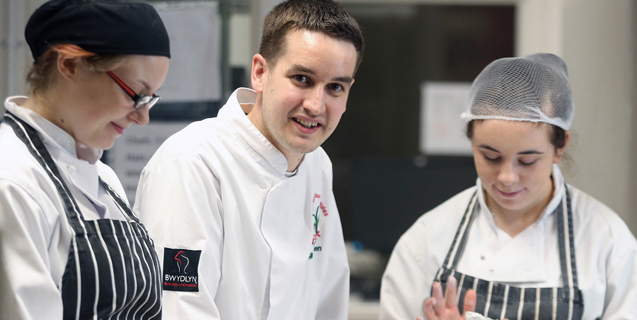 Hospitality training officer Michael Ramsden will not forget the year 2016 in a hurry. As well as being shortlisted as an Apprenticeship Awards Cymru finalist, the 29-year-old skilled chef has been selected by Culinary Team Wales to compete at the prestigious Culinary Olympics in Germany in October.

Michael, who works for Welshpool-based Cambrian Training Company and a Culinary Team Wales member, lives in Cardiff and has his family roots in Llandrindod Wells, where he previously owned and sold a bistro and catering business.

To say he’s passionate about his job and being would be an understatement. He trains and develops young chefs, shares the latest cutting edge culinary techniques and finds them placements in award winning kitchens to boost their skills and experience.

Due to his passion for training, he has been shortlisted for the Work-based Learning Assessor of the Year Award at this year’s Apprenticeship Awards Cymru, which take place at Venue Cymru, Llandudno on October 20. Sadly, due to his Culinary Olympics commitments with Wales, he will not be able to be there.

Jointly organised by the Welsh Government and the National Training Federation for Wales (NTfW), the prestigious awards celebrate the outstanding achievements of individuals, employers and learning providers who have excelled in contributing to the development of the Welsh Government’s Traineeships, Jobs Growth Wales and Apprenticeship programmes. The awards are sponsored by Pearson PLC and supported by media partner, Media Wales.

The Apprenticeship Programme is funded by the Welsh Government with support from the European Social Fund.

“I have always had a passion for training junior chefs,” said Michael. “It’s not only a sense of achievement but a huge honour to see someone succeed and do well with their lives.”

Having left school at 16, he became an apprentice chef at Brynafan Country Guest House, Rhayader and went on to work at the Lake Country House Hotel, Llangammarch Wells and Belle Vue Hotel, Aberystwyth.

He jumped at the chance two years ago to join Cambrian Training Company, who had delivered his apprenticeship. He’s now responsible for delivering hospitality apprenticeships and the AAA professional cookery and craft cuisine qualifications, which are tailored to meet the needs of chefs and their employers, including the Celtic Manor Resort, Newport and SA Brains, Cardiff.

He’s currently working towards an Internal Quality Assurance Award, which will enable him to become an internal verifier and is the company’s lead assessor for the craft cuisine apprenticeship, the gold standard for the industry.

Wales’ Minister for Skills and Science Julie James congratulated Michael and the other 32 shortlisted award finalists. “We are proud to be delivering one of the most successful apprenticeship programmes in Europe with success rates in Wales remaining well above 80 per cent,” she said.

“Developing skilled people is vital for our economy. We have some truly exceptional apprentices here in Wales and the Apprenticeship Awards Cymru provide a perfect platform for us to celebrate their hard work and achievements. Equally important are the learning providers and employers who go the extra mile to support their apprentices.”