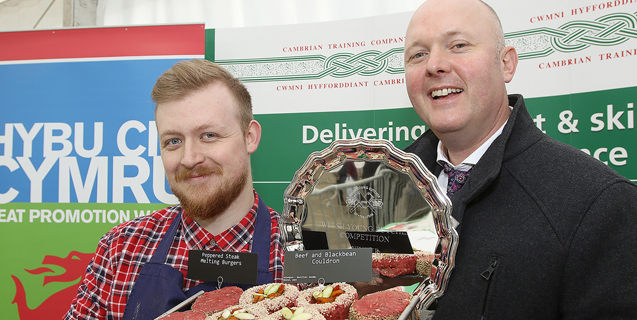 A performing arts student who dropped out of university to launch a career as a butcher found himself in the spotlight at the Royal Welsh Winter Fair in Builth Well on Monday.

Sam Hughes, 22, from Brian Crane Butchers, Maesycwmmer, Caerphilly, proved himself to be top of the chops as he won the Welsh Young Butcher competition on his debut. Runner up was Joseph Gibbs, 21, from Martin Players, Cardiff and third was Dewi Davies, 19, Bethesda Farm and Coffee Shop, Bethesda, Narberth.

Sam followed the morning competition by finishing joint third in the Welsh Pork Butcher contest, which was open to butchers of all ages, in the afternoon. The winner was Craig Holly, of Neil Powell Butchers, Abergavenny, with Kevin Aldred, Martin Players, Cardiff runner up and Clive Swan, Swans Farm Shop, Mold, joint third.

“It was a bit nerve-wracking and my hands wouldn’t stop shaking for the first hour,” confessed Sam, an apprentice with Cambrian Training Company. “The second hour was much better and I couldn’t stop smiling when my name was announced as the winner of the Welsh Young Butcher competition.

“I was happily surprised to win and it’s a big confidence boost. Even though I have only been a butcher for 18 months, this shows that I am good enough to win competitions and I now have a trophy to show customers.

“I dropped out of university in Cardiff to get a full-time job and I think I have done myself proud.”

It was also a competition debut victory for Craig, 28, from Abergavenny. “I just entered the competition for the experience, to be honest and I still don’t believe that I won,” he confessed. “I was pretty nervous and had to correct one or two mistakes, but I’m chuffed to have won.

“I’m definitely going to do a few more competitions because it was nice see things that inspired me.”

Both finals are stepping stones to UK-wide competitions, with the winners having the opportunity to follow in the footsteps of talented butchers like Matthew Edwards from Vaughan’s Family Butchers, Penyffordd and Peter Rushforth from Swans Farm Shop, Mold, who have both represented the UK won the Butchery WorldSkills UK National Competition.

Apart from having the kudos of being named Wales’ best young butcher, the winner received a cheque for £130, while the runner up received £70.

This year, the young butchers were challenged to produce a display of meat in two hours from a whole top rump of Welsh Beef, a shoulder of PGI Welsh Lamb, a whole pork belly and a whole chicken.

In the pork butcher competition, the finalists were given two hours to create an innovative and creative display from half a Welsh pig, using either modern or traditional methods and packaging to best promote Welsh Pork to consumers.

The judges for both finals were Steve Vaughan, owner of Vaughan’s Butchers, Penyffordd, Wrexham and Steve Morgan, Morgan’s Butchers, Brecon and Builth Wells.

Sam Hughes with one of the meat displays that helped him become the Welsh Young Butcher champion.