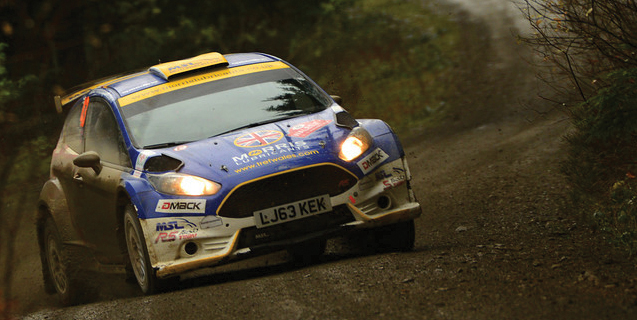 The opportunity for Welsh rally driver Tom Cave to compete on this year’s Wales Rally Great Britain in a Ford Fiesta R5 has been made possible by the backing of a range of supporters, including 2013 season-long partners, Morris Lubricants. The 21 year-old will compete on the event for the fourth time, having enjoyed success in the past, including winning his class by more than 15 minutes on his debut in the FIA World Rally Championship in 2008 and finishing second in SWRC for the works Proton Motorsports team in 2012.

The car is owned and will be run by MSL Motorsport, a rally rental company whom Tom met at Rallyday this year, when they asked him to demonstrate one of their two M-Sport built Fiesta R5s. The R5 is widely regarded as the future of the sport and features a 1.6-litre turbocharged engine coupled to a five-speed sequential gearbox and four wheel-drive system with front and rear mechanical differentials. It is described by M-Sports as the perfect transition from two to four-wheel drive rallying.

Partnering Tom and co-driver Ieuan Thomas on Wales Rally GB will be 2013 MSA British Rally Championship season-long partners Morris Lubricants. The UK-based lubricant specialist has been a keen supporter of Tom throughout the 2013 BRC season, in which he took third after a series of consistent podium finishes. As such, the Fiesta Tom will use on the event will feature the now-familiar blue and yellow livery of the Shrewsbury-based family business, as well as a large Union Jack to celebrate the company’s heritage.

Also supporting Tom on the event will be Cambrian Training, the provider of training in professional and business skills and which has supported Tom on previous occasions.

Tom will, of course, also be supported by the Trefeddian Hotel, the family business and where he works as a trainee manager. The hotel, which stands on the very entrance of the Dovey river on the west coast of Wales and overlooking the Irish sea, has been Tom’s staunchest supporter since he began rallying at the age of 15.

Tom will be run alongside former British Rally Champion Mark Higgins by MSL on the event and, like Higgins, will use DMack tyres for the rally. Tom has taken over the entry lodged at the beginning of the season by Martin Semerad and therefore, will wear No. 43 on his car, co-incidentally the number made famous by one of Tom’s rally heroes, Gymkhana star Ken Block. As such, he will run as part of the WRC2 field, with the opportunity to score points and be located within the WRC2 campus in the Deeside service area.

Commenting, Tom said; “I am incredibly grateful for the support from all of our partners and sponsors and their help to make this possible. Competing on my home round of the WRC is always the highlight of the year for me and to be doing so in a car like the Fiesta R5 makes it even more special this year.

“I am delighted that Morris Lubricants will be supporting us again on Wales Rally GB. Their support throughout the British Rally Championship this year has been superb and to have them on board for Rally GB gives us a huge confidence boost, knowing that they are behind us again.

“I am also grateful to Cambrian Training for working with us again and of course the MSL team for offering us this opportunity in the first place. I must also thank the DMack team and Martin Semerad for their help in putting the entry together and ensuring that we will form part of the WRC2 field.

“Finally but by no means lastly, the Trefeddian Hotel and my family and friends, all of whom have supported me throughout my rallying and will be completely behind me as we head for North Wales next month.”

Morris Lubricants’ Managing Director Andrew Goddard said everyone was looking forward to the rally; “Sponsoring Tom to compete in one of the worlds’ most famous rallies gives us the opportunity to increase exposure of the Morris Lubricants brand while at the same time supporting a talented young driver.”