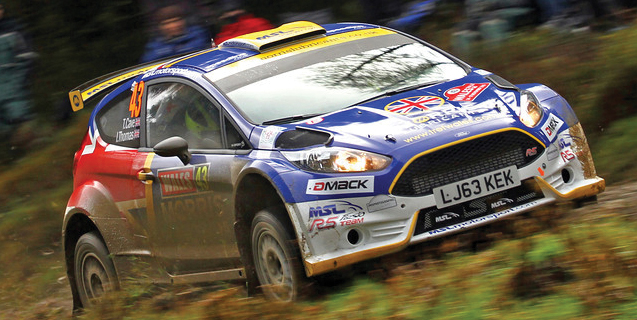 Welsh rally driver Tom Cave enjoyed a strong finish to the 2013 Wales Rally GB, having set a string of impressive stage times throughout the event. Despite a series of penalties for leaving service late following extensive and over-running mechanical work during the event, the young driver, who celebrated his 22nd birthday during the rally, came home 12th overall and fifth in the WRC class.

Cave, from Aberdovey and partnered by Ieuan Thomas from Llanelli, took a cautious start to the event on Thursday night. However, a hard landing in the last stage caused an oil leak from the gearbox and the MSL Motorsport team were unable to change the gearbox in the allotted 45 minute service halt. It eventually took 26 minutes longer, leading to the first of the penalties.

Tom and Ieuan set about proving what they knew they were capable of and claimed the stage win in the WRC2 category on five of Friday’s six stages. However, in that evening’s service, a rear differential change also over-ran and led to further penalties. By Saturday morning, the pair had 5m10s of lateness penalties and were fighting their way back up the leader board.

Saturday saw them continue their battle, consistently setting top three WRC2 stage times and enjoying a superb battle with Elfyn Evans, Jari Ketomaa and Mark Higgins. They eventually reached the end of the penultimate day in 12th place overall, having dropped to 45th on Thursday.

The fourth and final day saw seven more stages and Tom and Ieuan once again began setting top three stage times in their Morris Lubricants-supported Ford Fiesta R5. However, their car developed a mis-fire during the final day, similar to that experienced by team-mate Higgins on the third day and this led to a lack of power and lost time. However, the problem was not severe enough to further affect the result and Tom and Ieuan reached the finish ramp of the event in 12th place and fifth in WRC2.

However, without the time penalties for lateness out of service, it would have been a different story, with Tom and Ieuan potentially standing on the WRC2 podium, behind Evans and Ketomaa.

As an added reward, Ieuan was presented with the Gareth Roberts Memorial Trophy, as first Welsh co-driver at the finish.

Commenting, Tom said; “It’s been a superb weekend. Of course, it was very disappointing to pick up the penalties early on and through no fault of our own but that’s how it goes sometimes. But with the chances of a result gone, it meant there was no pressure on us and we could enjoy the driving, enjoy the car and see what we could do.

“I must admit I was surprised with our pace on Friday – I didn’t expect to win five out of six stages. I knew I had my mojo back and the feeling in the car was great – it was working well, the DMack tyres felt great and everything clicked.

“That carried on for the rest of the event until the engine started to misfire on the last day. That was on the second stage of the day and meant that I was having to change down gears just to climb some of the hills. But we made it to the end and I am delighted with the performance, if not necessarily the result itself.

“I want to thank my sponsors and partners who made this amazing adventure possible: Morris Lubricants, who have supported us throughout the 2013 season and have been behind us consistently; the Trefeddian hotel which has supported my rallying since I began and Cambrian Training, who came aboard to help us realise this opportunity.

“I would also like to thank my friends, family and of course, the amazing support from all our fans, – in the stages, on Facebook and Twitter and throughout the rally.”