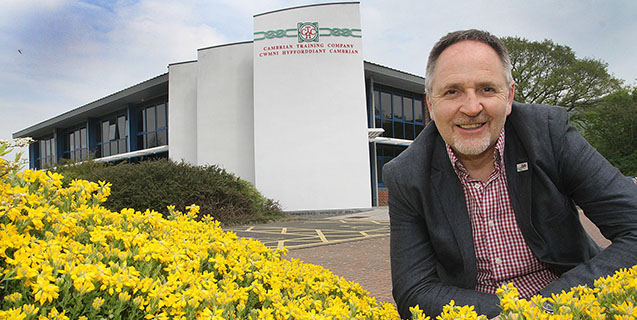 A leading figure in the work-based learning sector in Wales says he’s hugely honoured to have been awarded an OBE in the New Year’s Honours list for his services to education and training in Wales.

Arwyn Watkins, managing director of Cambrian Training Company based in Welshpool, is particularly delighted that the award recognises the contribution that the independent sector makes to education and training in Wales.

“This award is normally reserved for directors of education and principals of Further and Higher Education institutions,” he said. “It’s a huge honour and I would like to think that it recognises the important contribution that the independent training sector makes to the daily lives of people living and working in Wales.

“It is also recognition for Cambrian Training Company, which I joined nearly 20 years ago and my family. I couldn’t do the range of work that I do without their full support.”

Mr Watkins is a key figure in the work-based learning sector in Wales, having previously served as chairman and chief executive of the National Training Federation for Wales where he worked in partnership with Welsh Government and the network to shape the successful programmes delivered in Wales today.

He is a board member of the Regional Learning and Skills Partnership for West and Mid Wales, a trustee of British Food Trust, president of the Culinary Association of Wales and a member of the WorldChefs’ Feed the Planet and Sustainability Committee.

A farmer’s son, he left Builth Wells High School to join the Army as an apprentice chef and has maintained his commitment to apprenticeship programmes ever since. On leaving the Army, he joined the Merchant Navy, working for Stena Line and became a catering college lecturer in Kent before returning to Mid Wales to join Cambrian Training Company in 1998.

The company has enjoyed considerable growth under his leadership, winning the Apprenticeship Provider of the Year at the 2007 and 2012 Apprenticeship Awards Cymru together with a series of other accolades. The company now employs more than 120 staff and sub-contractors.

Culinary skills are one of his main passions and he coached the Junior Welsh Culinary Team to a Culinary Olympics gold medal in 2004. As a member of the Applied Ability Awards National Committee, he was instrumental in running pilot programmes in Wales leading to ground-breaking craft-led qualifications for chefs.

Away from work, Mr Watkins is president of his local rugby club, Cobra RFC.