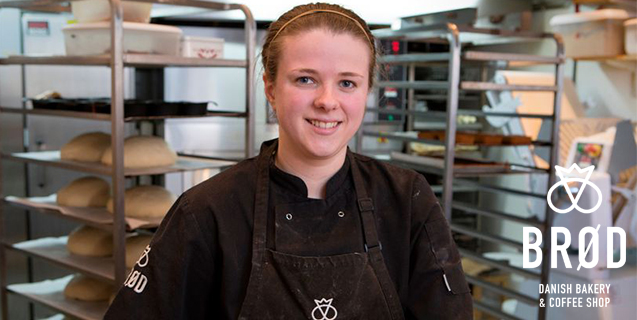 A young baker from Cardiff is to travel to Denmark to learn all the secrets of baking the traditional Danish way.

Becky Chatfield works as an apprentice at the popular Brød bakery in Pontcanna, set up by Danish expatriate Betina Skovbro, where she is trained by Cambrian Training, a leading Welsh training provider based in Welshpool.

The 22-year-old, who is originally from Devon, has always loved baking although she had no thought of taking it up as a career when she graduated from Swansea University with a degree in marine biology.

She said: “I’ve been baking for as long as I can remember so the skills were somewhat there, but moving it to a professional market is completely different.”

She saw an advert for a job at Brød and decided to apply.

“Danish baking is such a niche area, but there’s nothing around, just the supermarket pastries and they’re obviously not the same. Working here, it’s something you wouldn’t learn anywhere else.

“And it’s such a small team, everyone knows each other and likes each other. The whole place is open plan so we can see the customers [from the kitchen]. It’s a nice place to be.”

It’s the first time she’s been to Denmark, and she will be spending six days split between two bakeries where she hopes to pick up new skills, and a little else besides.

“We do everything here authentically Danish, but it’s being able to see it out there and hopefully get some inspiration for new products,” she said.

“And get a little of the culture as well, hygge and all that is such a big thing but seeing it first hand is going to be completely different.

“They’re the happiest country in the world supposedly so I guess I’ll see whether everyone is smiling on the train to work!”

If you thought Danish baking was just about the Danish pastries you’ve seen in the shops, Becky is keen to disabuse you.

“There’s such a variety of different varieties and types that I’d never seen before working here, and I guess out there there’s going to be a whole variety of things I haven’t seen before that it will be great to learn about.”

She has some advice for anyone thinking of entering the profession.

“It’s hard physical work, but as long as you’ve got the passion for it, it’s great. Baking’s always been a hobby for me and now I get to do it everyday.”

You also have to be a morning person. A working day at Brød starts at 5am.

Becky is the first apprentice from Brød to make the trip to Denmark. Ms Skovbro says it will be a valuable opportunity for her to see some of the techniques of Danish baking firsthand, and also to learn more about the country and its culture.

“I think it’s important for them to see where it comes from,” she said.

She explains “We try to listen to our customers, but we are very true to the traditional Danish ways. We don’t have hot cross buns or mince pies in Denmark, but we make them because that’s what our customers want.”

She set up Brød a little over two years and is pleased with how well it has done.

“At the start it was a massive gamble, buying all the bakery equipment cost more than my house. But we’ve been so well received, I think because we listen to our customers and if we have a bad review we fix it.

“Because we do everything fresh on the day, you have to have special skills which Becky is learning, In Denmark there are lots of professional bakers but in this country there are very few and no apprenticeships. The profession is dying because it’s all automated in factories.

“In Denmark people support their local baker because they know it’s handcrafted with good quality ingredients and they’re buying from someone who cares.”

Now she is looking for another apprentice to join Becky in the Brød kitchen. The main qualification, it appears, is to to be passionate about baking.