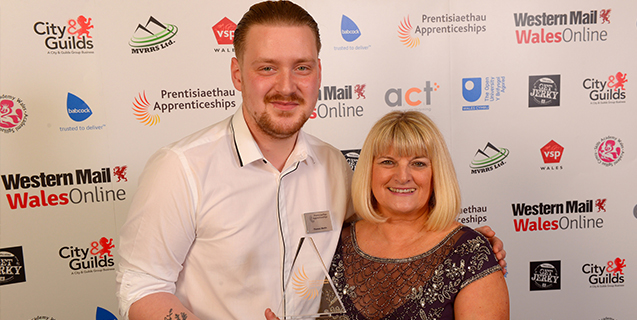 Apprentice chef Thomas Martin, who has sampled work in some of London’s top fine dining restaurants, celebrated the recipe for success when he collected a coveted national award.

Thomas, 22, sous chef at 13 Market Street, Caerphilly, was named Foundation Apprentice of the Year at the prestigious Apprenticeship Awards Cymru held at the Celtic Manor Resort, Newport on November 9. The award was sponsored by NPTC Group of Colleges.

He said “I’m absolutely elated. This award means the world to me. For me it’s the next step in my career and I want to be a champion chef in Wales, my adopted country.

“I know what I want in the future and am prepared to put in the hard work. But I wouldn’t be where I am now without the support and encouragement of Cambrian Training Company, which gave me the belief.”

He also thanked his fiancé Jaimie McSweeney for her encouragement and support when he was homesick while working in London.

The annual awards are designed to showcase and celebrate the outstanding achievements of learners, employers, tutors and assessors who have excelled in contributing to the development of the Welsh Government’s Traineeships and Apprenticeship Programmes.

Thomas is following a career path that he hopes will lead him to achieving his ambition of opening his own restaurant in Cardiff to champion the very best Welsh ingredients.

Having achieved a Foundation Apprenticeship in Professional Cookery with training provider Cambrian Training Company, he plans to progress to an Apprenticeship next year.

Earlier this year, he was rewarded for his passion and dedication to learning when he was named Foundation Apprentice of the Year in Cambrian Training Company’s annual awards and was a runner up in the Junior Chef of Wales contest.

He has worked at Holm House Hotel, Penarth, Manor Parc Country Hotel and Restaurant, Cardiff, Chapel 1887, Cardiff as well at the Principality Stadium as a member of the catering team for the Champions League final last year.

“It was a great experience and who wouldn’t take the opportunity to work in three Michelin starred restaurants at the age of 20 or 21,” he said. “The experience altered what I wanted out of my career and it made the path I needed to go down a lot clearer.

“My ambition is to have my own restaurant in Cardiff championing Welsh ingredients. I want to fly the flag for Wales.”

Thomas, who originally set out to be a carpenter when he left school before discovering a passion for cooking, credits his Apprenticeship with giving him the confidence to work in London.

Minister for Welsh Language and Lifelong Learning, Eluned Morgan congratulated Thomas together with the other award winners and finalists for setting the gold standard for Apprenticeships and Traineeships.

She described him as an “exceptional individual” who had excelled in his workplace and applauded his commitment to the Apprenticeships Programme in Wales.

“The Welsh Government regards Apprenticeships as a priority area and, with support from the European Social Fund, has committed to creating a minimum of 100,000 high quality all-age Apprenticeships over this Assembly term,” said the Minister.

“We have a clear vision for addressing the needs of Welsh businesses, developing skills pathways and increasing higher level skills that benefit the whole of Wales. If the Welsh economy is to continue to grow, then we must work together to equip Wales with a world class workforce.”