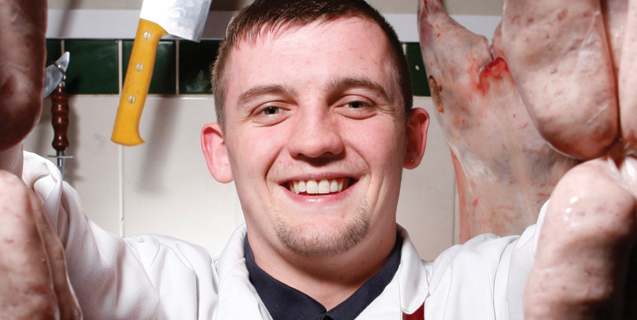 A champion young butcher who employs two apprentices butcher and a health board, which is committed to improving staff skills and patient care, celebrated victory at an awards ceremony to celebrate vocational qualifications in Wales.

The EU-backed awards were presented by Deputy Minister for Skills, Jeff Cuthbert, at a ceremony held at Coleg Morgannwg, Nantgarw, one of three regional VQ Day events in Wales yesterday (Wednesday).

The VQ Learner of the Year award recognises learners who clearly demonstrate progression and excellence in vocational studies and have made considerable achievements in their field.

“Winning this award is one of the greatest achievements of my life so far,” said the talented butcher, who next month represents Wales in The National Federation of Meat and Food Traders’ Premier Young Butcher competition in Birmingham. “It just proves that hard work and dedication gets you to where you want to be.”

The third generation of his family to run the butcher’s business, he is passionate about the industry and promoting butchery as an interesting and rewarding career for young people.

Betsi Cadwaladr University Health Board beat Nantgarw-based business services company Capita and Flintshire County Council to take the VQ Employer of the Year Award. This award recognises employers who promote the value of vocational qualifications in the workplace and make a real contribution to improving the skills and national competitiveness.

Benefits include efficient stock control and less waste, widespread improvement in infection control and more patient support at meal times. Maternity support workers have also been introduced through the acquisition of relevant VQs.

Jill Williams, the health board’s vocational education manager, said: “I am absolutely delighted. This award is for everybody at the health board who is following a vocational qualification. They are often the unsung heroes and it’s fantastic for them to be recognised.”

Wales’ Deputy Minister for Skills, Jeff Cuthbert congratulated the winners and finalists. “It’s important that vocational qualifications become, and remain, first choice options for our brightest and best learners and that their worth is fully recognised. VQ Day plays a key role in securing that objective.

“I hope that this year’s VQ Day will inspire even more individuals to consider a vocational pathway to success, further cementing the position of vocational qualifications at the heart of our economy and national life.”

Scott Waddington, Wales Commissioner for Employment and Skills, said: “Vocational qualifications provide an excellent grounding for careers in all sectors of the economy and a valuable framework within which young people can progress at work and build the skills that Welsh industry needs.

“It’s vital that these qualifications are made available to as many young people as possible.”

Vocational qualifications have never been more important to the economy and the individual, as they deliver the trained, talented employees that businesses are crying out for and ensure young people have the skills needed to succeed in education and work.

VQ Day and the VQ Awards are co-ordinated in Wales by ColegauCymru and the National Training Federation for Wales (NTfW) with the support of the Welsh Government and part funded by the European Social Fund.