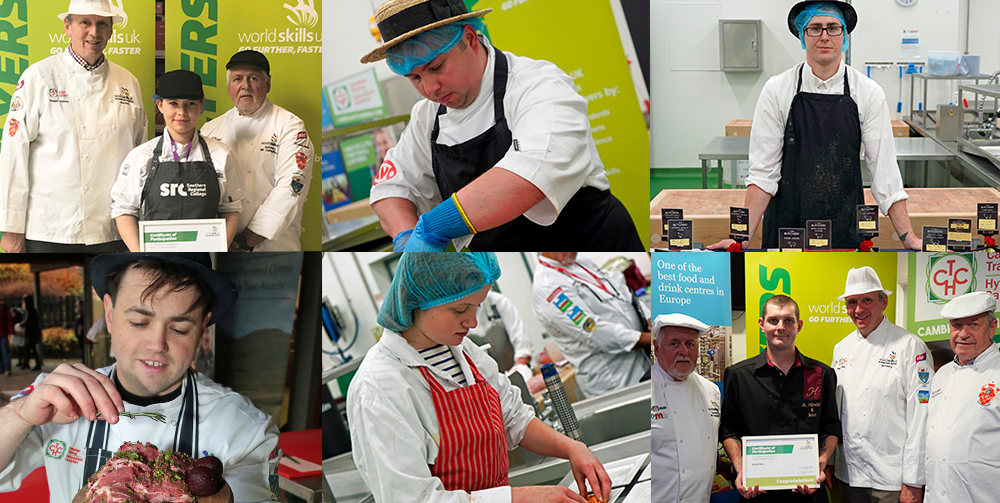 Six butchers from Wales, England and Northern Ireland have secured coveted places at this year’s final of the Butchery WorldSkills UK Competition.

They were the top scoring butchers from regional heats across the UK held earlier this year. In the final at WorldSkills UK LIVE, held at the NEC Birmingham from November 21-23, they will complete five tasks over two days in front of a live audience, which will test their skills to the limit.

Hoping to go one better this year after coming runner-up in 2018 is Welsh Butcher of the Year Craig Holly, 30, from Pontypool, who works for Chris Hayman Butchers, Maesycymer, Hengoed and is a member of the Craft Butchery Team Wales.

To add extra spice to final, one of Craig’s Welsh teammates, Liam Lewis, 31, from Winsford, who works for The Hollies Farm Shop, Little Budworth, near Tarporley, will also be competing for the coveted prize of the UK’s best butcher.

The other finalists are Stefan Rice, 35, from Cannock, who works for A. Hindle and Son, Stafford; Elizabeth James, 17, who works for her family’s business, W. James Butchers, Stoke-on-Trent, Jason Edwards, 25, from The Hollies Farm Shop, Lower Stretton, near Warrington and Codie-Jo Carr, 17, who lives in County Armagh and works for Fred Elliott Family Butchers, Banbridge, Northern Ireland.

The butchery competition is organised by award-winning Welshpool-based training provider Cambrian Training and supported by an Industry Steering Group. Sponsors are The Institute of Meat, The National Craft Butchers, The Worshipful Company of Butchers and Hybu Cig Cymru/Meat Promotion Wales.

Chris Jones, head of Cambrian Training’s food and drink business unit, is predicting a closely contested final and is delighted that a record number of female butchers entered this year’s competition.

“It’s great to see two talented and skilful female butchers in the final, which will hopefully raise awareness of the opportunities available within the industry and encourage other young women to follow in their footsteps and compete at the highest level in the UK,” he added.

To enter the competition, butchers must possess good knife and primary and secondary butchery skills, including seam butchery, with a minimum of six months practical experience, good tying and stringing skills, sausage making experience and the ability to work under pressure in front of an audience.

Butchers wishing to compete to become the UK’s best butcher 2020 may register at https://www.worldskillsuk.org/champions/national-skills-competitions/express-your-interest-in-worldskills-uk-competitions-2020

Craig said: “I competed in last year’s final and came second, so I know what to expect and am looking forward to the competition. Hopefully, I’ll do well but you can’t be too confident because you never know what’s going to happen.

“With Liam also qualifying for the final, I am going to have some friendly competition. I have already started practising by creating products that are ready to eat rather than making a display.”

Liam, who is originally from Wrexham, said: “The final will be a good step forward and I am sure Craig and I will have a bit of friendly banter. He’s a really nice man and has helped me with a few ideas without giving too much away!

“It’s good to have someone I know in the final and I am going there to get into the top three. It’s one of the largest UK competitions and would be great accolade if I won.”

Stefan said: “I’m excited, looking forward to the final and would like to think I could do quite well. Having read the brief, I am fairly confident I have all the skillsets to cover the tasks.

“It would be fantastic to win this competition. I entered the BBC Young Butcher competition when I was 25 but didn’t make the final.”

Both Jason and Elizabeth are butchery apprentices trained by Reaseheath College, Nantwich, where one of the competition heats was held.

“This is the first time I’ve entered a large competition like this,” said Jason. “It’s been a good learning experience and I’m really looking forward to the final. Butchery is a great career for young people, particularly if you like being active and creating things with your hands.”

Elizabeth, a fifth-generation butcher who works alongside her father and other relatives, said: “I was really pleased to get selected and I’m excited and looking forward very much to the final. Just qualifying is a big achievement.”

Codie-Jo, whose family runs a small retail and wholesale meat business, has an ambition to carry on the family tradition by opening her own butcher’s shop.

Having qualified for the final through the Glasgow heat, she said: “This is my first big competition. I will do my best in the final and I hope that will be good enough to win the competition. It would be a real achievement to win it.”

Butchery is one of more than 60 skills to feature in WorldSkills UK LIVE. The competitions are designed by industry experts and focus on the highest UK and international standards.